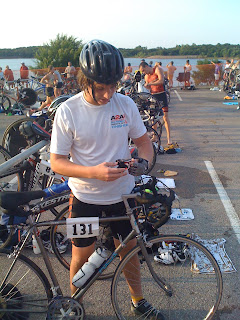 The big one ran an Olympic distance triathlon last weekend. That's 1/2 mile swim, 24 mile bike, and a 10K run. Needless to say I was, and am, a very proud father.

I think what I was most proud of was that he hurt a little during the race. I'm always proud of him no matter what he does and I love it when he wins something. What I've been waiting to see is that look in his eyes that says he has earned something.


There's a big difference between winning and earning although the two can occur at the same time. So far in my son's young life I have only seen the winning. That's not to say he has won everything. I've seen his failures too but win or lose it was always something external to him it seemed. It wasn't something that he internalized or became epic to him. It was just something he did. The earning is something that I couldn't help him with. I could give him advice (although he rarely listened) on how to succeed or how to do his best but I couldn't help him get to that place where he worked for something meaningful to his inner soul and overcame the external obstacles and his own internal doubts to achieve a goal. No one can help him do that, he had to do it himself and it finally happened I think. 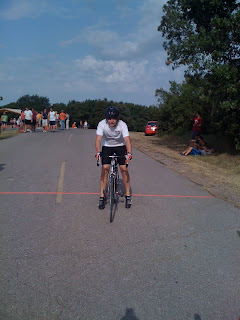 He is a wonderful kid and I want him to find himself and his inner strength. I hope this was the first step towards that. 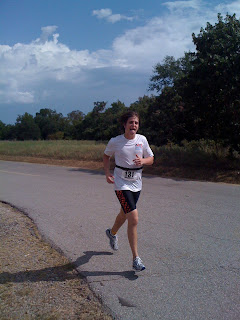 Thanks for listening
Posted by Willie at 8:06 PM 4 comments:

I spent last week in upstate New York for work. Normally I would be writing to you about all the hills I ran and all the many miles I got in. Not this time.

This time Willie was a bad boy.

I was there 3 nights and I ate like crap and drank like a fish each and every night. Couple this with very little sleep (funny how the drinking and lack of sleep always go together) and I was a mess by the time I finally escaped back to Oklahoma.

No running for 5 days and nothing but crap for fuel make for a hesitant body prior to a 10 mile run. It was like dragging your dog out for a badly needed walk in the rain. They know they need to go but just won't step out the door. I convinced myself that I needed a bit of punishment for what I'd done and this shamed me out the door this morning to meet the group at 6 AM for 10 miles. I think I sweat beer and chicken wings all morning in the 85 degree weather. Yes, 85 degrees at 6 AM! It's F-ing hot here in Oklahoma.

I made the 10 miles at a pretty good pace which I attribute to 5 days of rest. It was good punishment and I accepted it like a cowering Catholic School boy doing his penance. I'm hoping this puts me back on track although I'm planning to take it easy for a few days to get back in the groove.

Thanks for listening
Posted by Willie at 2:35 PM 2 comments:

Back in the Saddle

Notice the cowboy reference in the title? Yeah, someone got on my bad side the other day by implying that I couldn't be a "man" because I took my son back-to-school shopping while my girlfriend mowed my yard. She likes to mow, I like to shop. BITE ME!

After San Francisco I've been hearing those old voices in my head. You know the ones that start up when you see pictures of a place in the world you've never been that go something like, "I wonder if they have a marathon there?". I even caught a news store the other day that said air fares were extremely low right now and I spent the next few hours trying to find a marathon at one of the cheap fare destinations. Currently I have marathons planned for October, November, and December but I'm desperate to find one in September because I'm afraid a 2 month break is too much! Basically.... I'M BACK! I have that itch again to run. I love it.

During my break from blogging I completely lost that itch to travel and run marathons and I was afraid it was a life change that would last. I try to accept those life changes and see them as not losing something but as gaining something new but it's still hard to chew. I love running marathons and traveling as much as I can but if you don't have the inner drive it because a horrible struggle and just not worth it.

I like being back. My wonderful running club has started their training for the fall marathons. They are only up to 8 miles for their long run but we had over 200 people show up at 6 AM yesterday! These things are growing every year and it's great to see and meet new people. I had a good 8 mile run with my old friends yesterday. Everything on my old body is working well and the heat makes it wonderful to run hard and get those endorphins flowing. I absolutely love finishing a run drenched in sweat to the point that it looks like you just got out of a pool. I don't particularly like my smell while sitting at Starbucks afterward though. Oh well, I suppose that's just part of the experience.

Thanks for listening
Posted by Willie at 8:41 AM 1 comment:

I've taken all I can take and I just can't hold this rant in anymore. I know a lot of you are cyclists as well as runners so this may offend you but... Why do cyclists think they own every inch of pavement in the world?? And why are they such a-holes about it?

If I've seen you coming at me on your bike for the last hundred yards and have gotten out of your way you don't have the right to scream at me when you finally get your head out of you ass and looked up when you're 2 feet away. I'm sure you were surprised, but it wasn't my fault. That makes you an a-hole. Actually it makes you an arrogant a-hole.

If you're riding side-by-side with you buddy on a narrow trail where it's common for people to be riding and running in both directions it would be nice if one of you would move over when a running is coming the other way. You don't have to, I will move over to the grass to be sure I don't get tire makes up and down my body, but it would be nice.

I love that you yell "on your left" when you pass me. I really do. But please don't scream it and follow it with an insult to my mother. I'm just running I don't mean to piss you off with my presence.

I would never write complain about these things if they were isolated incidents. These three things have become common occurrences on my runs where cyclists are common. I like to think that I don't hold hard feelings towards anyone but I must admit that cyclists are not my favorite people. I've gotten to the point where I avoid them and don't like to be around them not just out on the roads. I hate that and I don't want to feel that way.

Thanks for listening
Posted by Willie at 5:37 PM 2 comments:

Willie
I wanted to run 1 marathon before I turned 40. After that first marathon in 2007 I was hooked. These are my thoughts and ramblings.